“Those who seek quality journalism want to understand. Those who simply rely on existing information make do with just knowing. This is the main difference between those who get ahead and those who lag behind”. This was one of the messages that Andrea Ceccherini, the President of the Osservatorio Permanente Giovani – Editori, gave during his interview with Massimo Gramellini, Deputy Editor of La Stampa. In this sense the “People of Bagnaia” have already made their choice in terms of knowledge, awareness, independence and quality. A sort of “civic revolution” started a few years ago with a clear mission and goals. Over time it has become a real benchmark for young students, editors and the big names in journalism.

In the 2015 edition of the Bagnaia the growth between the lines had a decisive international flavour. Before an audience consisting of the Editors-in-Chief and Directors of the main US newspapers (from The New York Times to The Wall Street Journal, the Los Angeles Times to The Washington Post), Andrea Ceccherini cast his vision beyond the frontiers and set new challenges: “We are here – said the President of the Osservatorio – because we are committed to safeguarding independent quality journalism and we want young people to embrace it in order to ensure there will be less subjects and more citizens”.

Furthermore, Mr Ceccherini explained why it is important to safeguard journalism: “We live in a society in which we are bombarded more and more with dizzying amounts of information. And so we end up knowing more but understanding less and less. In today’s society it is no longer enough to know, more than ever before we need to understand. And in order to understand what is happening in the world we need independent quality journalism that can explain what is happening to us”.

Addressing the students Mr Ceccherini said: “You must demand uncomfortable journalism. Uncomfortable journalism is the one that does not indulge anyone, but which displeases some. It’s the information that makes a difference, because it sheds light where there are shadows. You must always remember that good journalism must never sell certainties, but feed doubts. This type of journalism has a price because it requires good journalists who will never tire to pursue it, in order to document it, and do what is needed to prove it. And you cannot expect to have it for free, because what has a value has a price. What you do not pay for today will cost you more tomorrow”.

To columnists he said: “You have the most wonderful job in the world. There has never been more thirst for knowledge than now and this is an extraordinary opportunity for you all, but your business models will continue to lose ground and your companies will suffer. Time has come to show more courage. More courage to defend your sacrosanct rights, starting from the rightful defence of copyright, as well as more courage to open up to innovation. Innovation is forcibly the result of experimentation. Experiment, experiment, experiment! In this field you must be leaders, never followers”.

Addressing newspaper editors, Mr Ceccherini warned them: “The world has changed. Do not close yourselves off, but instead open up! Open to change. Open to mobile technology and information on the go, open your newsrooms to the young as they are the ones that can lead you to the future. Never falter on quality. And on this point never yield. Never, because the credibility the readership will attribute to your brands will be based on quality”.

Speaking to teachers, the key to young students’ development and in particular to those in the audience, Mr Ceccherini said: “Spark curiosity in the eyes of the young and ensure it stays there as long as possible. Curiosity is the key to the door of knowledge and in a classroom where curiosity is high there will be lots of questions and plenty of ‘Why?’ and there will always be a good teacher. You must constantly bear in mind the image of childhood: that of a child who in the street is continually pulling on his/her mother’s skirt or his/her father’s jacket to constantly ask ‘why?’ in the face of everything. Continue to feed those childhood ‘whys’ so that the child, step by step, will become an adult and that adult will become a citizen with such a strong critical mind that will make him/her a player instead of a spectator of democracy”.

Finally, there had to be a reference to the outcome after 15 years of activities by the Osservatorio Permanente Giovani – Editori and the most important project, “Newspapers in the Classroom”: “Today numbers say it all” – said the President of the Osservatorio – “and words may be too much. To the success of our project, nowadays involving almost 80% of Italian students in secondary schools, we must add the effectiveness of results. All surveys point to one thing: the closer students get to quality journalism the less likely they are to distance themselves from it over time”.

“The main feature of this ninth edition of our event is the number of international leaders present. This meeting is designed to inspire all those that believe in change, including players in the media world.‎ It has to be clearly understood that without experimentation there is no innovation. Experimenting also has to be the main modus operandi of our country. In the light of this rationale, all those who will ensure innovation prevails over conservative attitudes, trust over misgivings, hope over fear, will be welcome in Bagnaia. The future belongs to those who show courage, and Bagnaia is for them”. 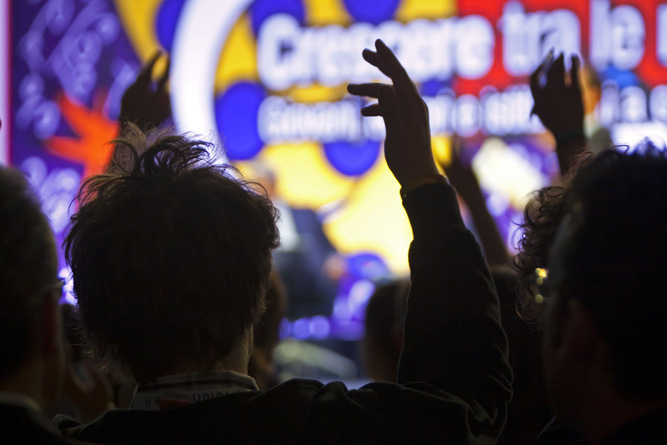 Below the guests of the ninth edition of “Growing between the Lines”. END_OF_DOCUMENT_TOKEN_TO_BE_REPLACED

Videos of the event

Here you will find interviews given by international guests during the ninth edition. END_OF_DOCUMENT_TOKEN_TO_BE_REPLACED